The best way to control the opposition is to lead it, new age and gnostic infections are spearheaded knowingly or unknowingly by many in the conspiracy community. If you are not familiar with the gnostic belief system please refer to this previous post.

The Heresy of Gnosticism

The Matrix trilogy is a portrayal of gnosticism, from salvation through knowledge to the hidden meaning of Neo’s given name. Let’s dive into the hidden messages and why:

1. The most blatant and obvious example is the name of the ships in the films, named both Gnosis & Nebuchadnezzar. 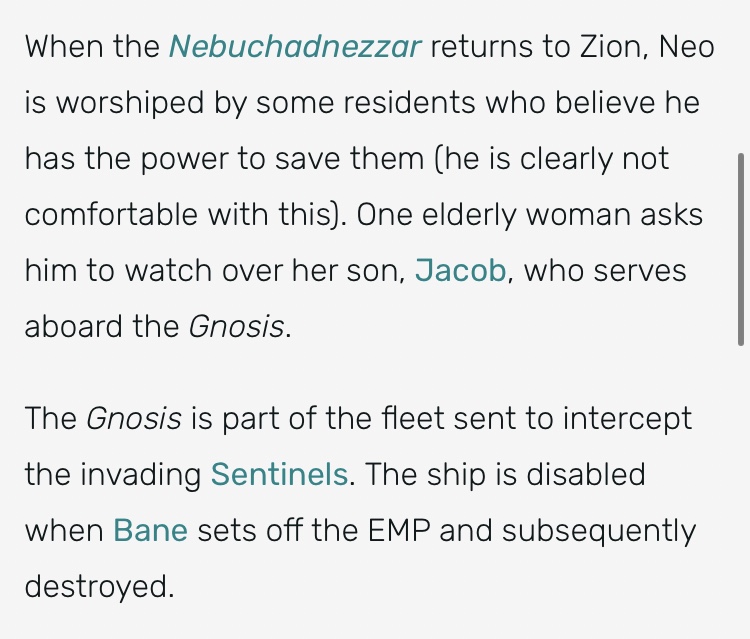 2. Neo’s given name is Thomas Anderson. Anderson in #Greek comes to “Son of Man”, and Thomas means “a twin.” The false twin son of man. I do believe this is inferring him as the antichrist even though they use hints to Jesus in the film (remember the movie is telling from their perspective).

3. The character Trinity falls in love with Neo “The One.” Symbolically representing the antichrist becoming “God.”

4. Humanity is trapped in a material prison that we need to escape from with knowledge.

5. The “architect” is controlling and wants to keep humanity in bondage. Parallels the gnostics believing the God of the Bible is a demiurge.

6. The agent smiths’ in the movie are archons, that gnostics view as jealous hinderers of their “ascent” that they must overcome. Quite possibly viewing angels of God as archons.

7. The movie explains in the beginning mankind was united, before the Artificial Intelligence “singular consciousness that spawned machines” was humanity’s downfall. Gnostics believe Sophia created God and He took over for evil. AI represents God’s means of supposed power for evil.

8. At the end, #Neo has achieved Gnosis (the freemason G), & becomes the gnostic redeemer passing on knowledge to others to “free” them from the prison of the material world, the matrix.

9. Usually with images of eastern traditions, the training programs teach Neo about “stillness” which is cinematically portrayed in the slow motion bullet sequences. This concept is present in gnosticism about higher aeons.

10. It’s about light vs. dark, remember roles are reversed here, as Neo kills Agent Smith by means of “pure illumination” as light shatters him from the inside out. (Isaiah 5:20).

I’m sure I’ve missed a couple parallels, when I originally saw this film years ago I thought it was anti-establishment, representing the governments oppressive regime over us. Over time that’s changed, it’s a pseudo-Christian facade of a film that unwittingly gets people to root for the ones they need to be against. This is the same formula done in many movies now, another prime example is V For Vendetta.